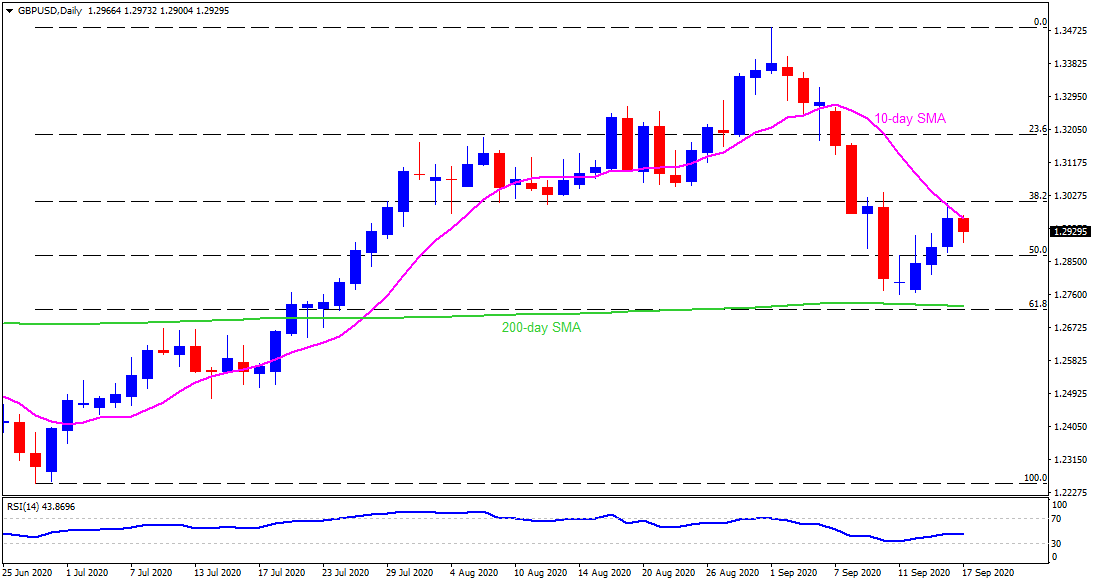 ​Technical Analysis: GBPUSD pulls back from 10-day SMA ahead of BOE

While Friday's Doji pleased GBPUSD bulls so far, 10-day SMA triggered a corrective pullback ahead of the Bank of England's (BOE) monetary policy decision on Thursday. Although cautious sentiment before the key event could be termed as an additional reason for the pair's latest weakness, the US dollar's broad strength during the post-FOMC moves becomes the major burden on the quote. Hence, until the BOE manages to please Pound buyers, the pair is likely to revisit a 50% Fibonacci retracement of its late-June to early August run-up, at 1.2865. Though, a confluence of 200-day SMA and 61.8% Fibonacci retracement near 1.2730 can probe the bears afterward.

Alternatively, surprise optimism by Andrew Bailey and Company may help the Cable to cross 1.2965 immediate resistance and attack the 1.3000 threshold. It should, however, be noted that the late-August low near 1.3050 and August 19 peak surrounding 1.3265 will be on the bull's radar if GBPUSD crosses the 1.3000 mark. Overall, the pair is likely to remain positive unless declining below 1.2730 on a daily closing basis.