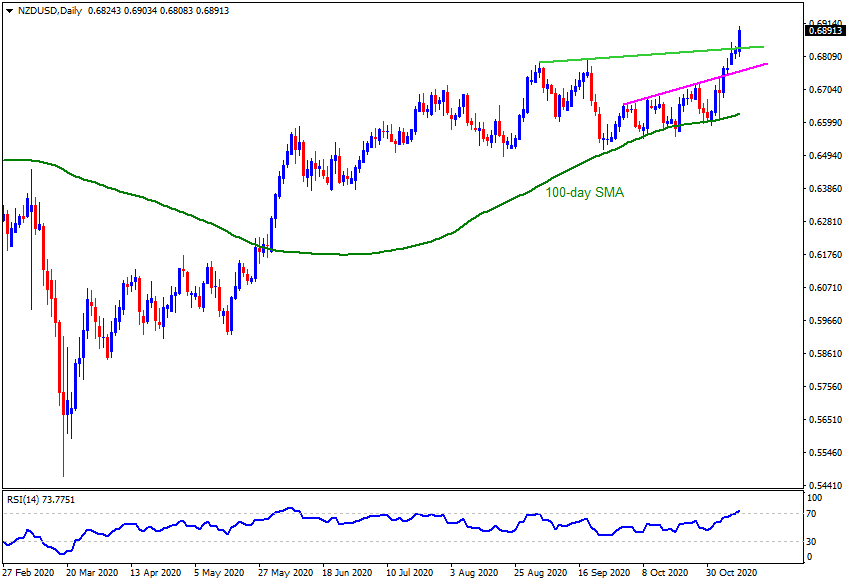 Although the Reserve Bank of New Zealand (RBNZ) offered fresh means to cheap lending, via the Funding for Lending Program (FLP), while also adding to the Large Scale Asset Purchases (LSAP), the absence of clear support for the negative rates boosted New Zealand currency during early Wednesday. The move helped NZDUSD to only extend the last week's upside break of the six-week-old resistance line, now support, but also cross an ascending trend line from September 02 and refresh the highest levels seen since March 2019 to 0.6903. The same favors the bulls to eye multiple resistances around 0.6940/45 marked during the March and February months of 2019.

On the contrary, overbought RSI conditions suggest a pullback move, which could recall the short-term sellers if breaking the multi-day-old support line, at 0.6830 now. In doing so, an upward sloping trend line from October 01 near 0.6760 will gain the market's attention. However, any further weakness past-0.6760 will eye the October's peak close to 0.6720 before directing the NZDUSD bears to the 100-day SMA level of 0.6625.