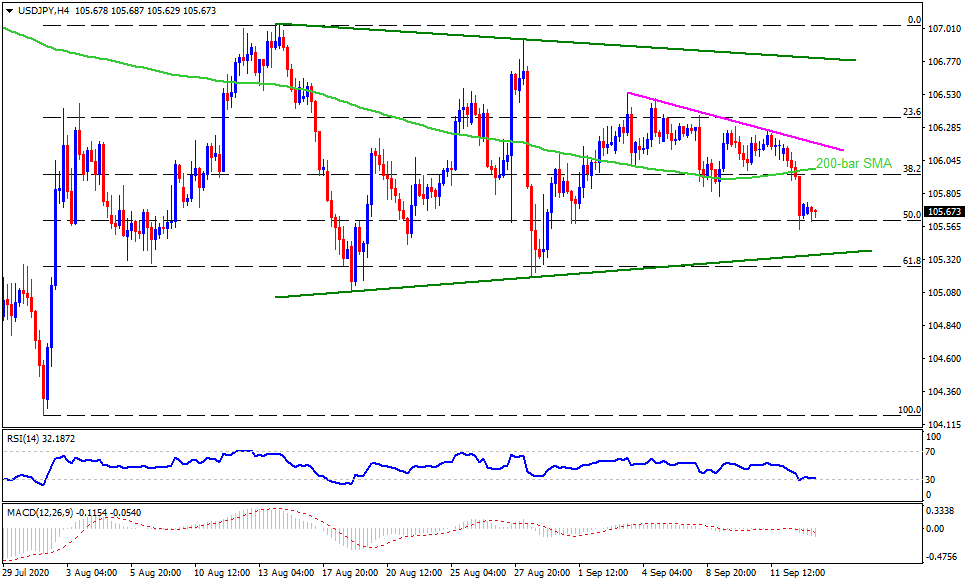 ​Technical Analysis: USDJPY bears keep the reins despite risk-positive news from US, China

Following Beijing's extension of the tariff relief on the US goods imports, the Trump administration also reversed the previously announced ban on cotton and tomato imports from Xinjiang. Not only the trade-positive headlines but upbeat data from China also favored the market's risk-tone sentiment during the early Tuesday. Though, fears of no-deal Brexit capped the optimism ahead of the European session. On the other hand, the Japanese yen takes clues from Chief Secretary Suga's victory in the PM election and BOJ's readiness to ease further. As a result, USD/JPY stays offered inside a monthly symmetrical triangle. However, the pair's latest declines below 200-bar SMA direct the quote to challenge the formation's support, at 105.35 now. It should, however, be noted that the 61.8% Fibonacci retracement level of 105.25 adds to the downside support for the pair.

On the contrary, an upside clearance of 200-bar SMA, at 106.00 now, will be challenged by a falling trend line from September 03, currently around 106.20. In a case where the bulls remain dominant past-106.20, the upper line of the mentioned triangle near 106.80 and August month's peak close to 107.05 will gain market attention.