Everything You Need to Know About Elliott Wave Theory

Ralph Nelson Elliott developed one of the most renowned principles also known as the Elliott Wave theory. It has grown into a crucial element of technical analysis. The main idea was to describe the price movement through Wave patterns. In this article, you will learn major Elliott Wave principles. 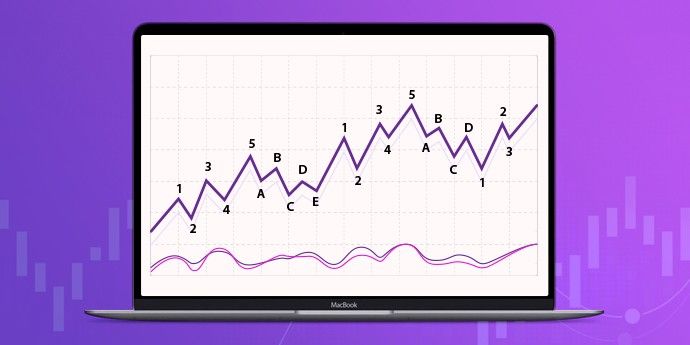 We will describe the way it works and how traders can benefit from using it in the financial market.

When Ralph Nelson Elliott created his theory, he wanted to not only overview but also identify fractal wave patterns. The same can be done in reference to stock or commodity price movement. Besides, experts use the Elliott Wave pattern to observe consumers' behavior and make accurate predictions about the market being overbought or oversold.

If a trader spots the trend that may bring a potential profit, we call it a "riding wave". There are different types of waves in accordance with a specific event or action that takes place in the market. For instance, we can imagine home and real estate owners in an effort to replace the mortgages they have with better ones. This is what experts call a "refinancing wave". It becomes clear that Elliott Wave patterns may turn out to be the dominating force than trying to foresee the price movement and market action.

Despite the type of wave, here is what you need to consider about the principle:

Before we discuss how the Elliott Wave theory works, let's go back in time for a moment to have a look at how the principle was born.

As was mentioned earlier, Ralph Nelson Elliott was the one to create and develop the theory of wave patterns. The theory made its debut during the 1930s. Elliott needed to find something to be busy with after retirement. He had plenty of free time and this is when he actually started developing his theory.

After learning numerous stock charts that depicted price movement in the range of periods and timeframes, Elliott eventually came up with the principle, which hit the headlines in 1935. Ralph used it to make accurate and precise predictions of the stock markets reaching their bottom. As a result, the Elliott Wave analysis could be found in portfolios of huge investors, top managers, traders, and so on.

In his later works, Elliott stated that the theory itself was not a magic formula to predict prices and foresee their movements. Instead, it was a tool to evaluate probable future market actions. He also stated that the best way to use Elliott Wave patterns was to combine them with trading indicators and other forms of technical analysis. What's more, the principle can show different results depending on the way traders interpret it.

As a rule, the theory works for stock markets. However, it may be used to trade other instruments as well. The main idea is pretty simple. It considers the stock price movement that is easy to predict because of rapidly repeating patterns that go up and down. We call those patterns waves and believe that they are dominated by investors' psychology. 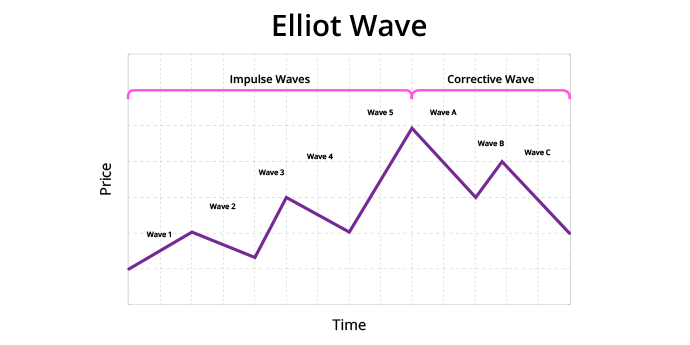 The principle is based on several baseline types of waves. They may include:

Impulse and corrective waves are the two fundamental patterns for the Elliott Wave theory although they are nested along with a wider range of waves.

It is the most complicated pattern, as it consists of 5 other waves also called sub-waves. They all tend to move in the same direction defining the larger-degree trend. It is very easy to spot even if you are new to the financial market. What's more, it refers to the motive wave type.

To identify the impulse wave, you need to strictly follow the 2 fundamental rules. If any of them has been broken, you are not using an impulse wave. So, here are the two unbreakable rules:

Also known as diagonal, corrective waves are formed by three separate waves. It is actually a new combination of sub-wave. They move in the opposite direction if compared to the trend. Corrective patterns refer to motive waves, which means they are aimed at moving the market in the same direction along with the trend.

Both impulse and corrective waves are nested together in order to create a larger pattern. Besides, the final result will depend on the period you want to observe. For instance, if you use a 1-year chart, you may find it in the middle of the corrective wave. But when it comes to a 10-year chart, it can depict the development of the impulse wave.

As a result, traders get a flexible tool that can be used with different trading styles and tactics. The key benefit here is that the principle helps to:

Keep in mind that the Elliott Wave theory is the ultimate tool itself. It is not a stand-alone strategy or trading instrument. The best bet is to use it along with other forms of technical analysis including indicators, charts, so on.